It is time for another edition of Shit That Bothers Me.. this time, the religious version!

This god damn book is bullshit; god damn it isn’t taking his name in vain cuz god is a title, not a name; rape and child weddings and slavery shouldn’t be okay and a loving and all-powerful god wouldn’t approve of that OR this book; contraditions everywhere; if someone came to you today saying they spoke to god, you wouldn’t believe them; I don’t care if you believe in a higher power but don’t follow that shitty book.

Let’s just start with the 10 Commandments, shall we?
1. You shall have no other gods before Me.
okay.. well, sorry, god, but there were thousands before you ever showed up on the scene, so we already lost that one.

2. You shall not make idols.
You mean.. like crosses with you on them, to wear around our necks?? Big ass buildings with gorgeous stained glass windows and beautiful tapestries and musical instruments in which to worship?? Or maybe you meant religious leaders and saints that people idolize and pray to? HRM.

3. You shall not take the name of the LORD your God in vain.
Okay, first of all, GOD is not a damn name. GOD is a title Christians began using to mean their god in particular. No; that’s not how it works. God is the male form of a supreme being that holds dominion over earthly matters. Like.. Zeus. Loki. Thoth. Jupiter. Hermes. Horus. All these guys are gods. And the female form is goddess. The christian god has a name. And actual really real “Hi, my name is John” name.
The Hebrew name was YHWH, which scholars THINK was prounced “yah-weh”.
This was translated roughly to Latin as Jehovah.
Also, there is Iehouah..and I don’t recall where that came from.
So.. unless you followed YHWH, Jehovah, or Iehouah (or any of their MANY spellings) up with DAMN IT, you have not done this, as GOD is not his name. Therefore GOD DAMN IT is nothing more than an exclamation, like HOLY SHIT or FUCK YEAH. (Conotation to be denoted by the way in which the eclaimer exclaims it.)

4. Remember the Sabbath day, to keep it holy.
Each religion has a different holy day. Sooooooo which was the first?? A lot of scholars say the true Sabbath is SATURDAY. Did the Bible ever say “yo, the Sabbath is Sunday!” no. No, it did not. So Sabbath could be the 29th of February every 4 years. We don’t know.

5. Honor your father and your mother.
Ahhh but people NEVER follow this up with the next bit, so let us post the ENTIRE thing, ‘k?
Ephesians 6:2-6
“Honor your father and mother”–which is the first commandment with a promise–
so that it may go well with you and that you may enjoy long life on the earth.
Fathers, do not exasperate your children; instead, bring them up in the training and instruction of the Lord.
Slaves, obey your earthly masters with respect and fear, and with sincerity of heart, just as you would obey Christ.
…oh, wait, that last line had nothing to do with this one, did it? WHOOPS.
But it plainly states for fathers to not exasperate their children. So why the hell should a child be expected to “honour” a shitty parent? Hrm.

6. You shall not murder.
Unless it is in his holy name, of course.
Oh, wait.. He didn’t stutter here, did he??

7. You shall not commit adultery.
But you MAY have multiple wives and concubines. Wait. How is that not adultery?

8. You shall not steal.
Unless it is religious artifacts you think you should have (lookin’ at YOU, vatican!)

9. You shall not bear false witness against your neighbor.
….but it is okay for priests to lie about fucking children. Woooo-kay then.

10. You shall not covet.
You mean.. you shall not be jealous? Like you are.. of other gods? 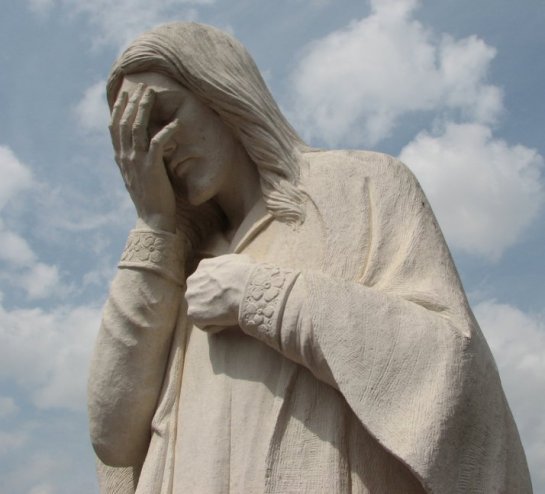 Yeah; I don’t get it either, YHWH.

Yeah. Because this shit does NOT make sense at all. Y’know why? PEOPLE WROTE IT. And I don’t see a single “thou shalt not rape” or “thou shalt not force marriage upon your children” or “thou shalt not own people” or.. I could go on. You know WHY you don’t see that?! BEcause ALL OF THAT was a-okay. All of it. And you’d think sticking parts of your body in to another person’s body without permission, owning and beating another person, or making a 6 year old get married to someone 10x their age would be frowned upon. Especially when their bodies can’t even physically handle the act of sex without being seriously damaged. heh

Oh, and thou shalt not suffer a witch to live.. that’s a great one! (Exodus 22:18) So I have a few questions. So, a witch is someone who actively practices magic, casts spells and hexes and all that, right? How many of you have ever seen magic performed. True actual magic where you see shit floating without wires, people turning in to frogs, the whole 9 yards.

Oh, none of you? Because these “witches” were making things like poultices. From plants. They were making aphrodisiacs. From plants. They were busy healing people with cough medicines and crap like that. That they made FROM PLANTS. Hell, AMerica had an entire ordeal where they BURNED WOMEN AND MEN (mostly women) ALIVE and DROWNED THEM for being witches. The funny thing about the drowning.. they thought if you floated, you were a witch (so burn her). If you sank, you weren’t a witch, and you’d go to heaven (whoops! Sorry, my bad!) And that the burning of a witch would cleanse his or her soul so they could go to heaven.
…. O.O
Soooooooooooo about that whole “thou shalt not murder” bit?? I guess it doesn’t count here…right?
And as we have progressed scientifically and medically, we have slowly shrunk that god of the gaps where we know they were practicing the earliest forms of medicine. If your god is all-knowing and omniscient, wouldn’t he have KNOWN that this shit wasn’t witchcraft, and told his followers? Wouldn’t he have made concessions stating “hey, follow these rules until X time, then follow those!”

What about rape? The bible states if a woman is raped in town and does not cry out for help, she is to be stoned to death. If she is raped in the country, stone the man. (but only if the woman is pledged to be married, mind you. Deuteronomy 22:22-27

Ahh, here are the bits about raping a woman who is not betrothed/engaged…
If a man rapes a virgin who isn’t engaged, he has to pay her father 50 pieces of silver and marry his victim.
Deuteronomy 22:28-29

WHAT THE HELL?!? Seriously. Oh, hey, it’s cool… just pay me some silver and marry her; it’s aight.

But then, I have people tell me we’re to ignore the old testament as far as following rules/what it says. Uh.. scuse me, but where does it say that in the bible? It doesn’t.

And I will close this semi-short (for me) rant with this..

All the people who supposedly wrote down god’s words.. they were not cast out or stoned or whatever overall; they were idolized by many.. so we’re told. So what would you do if someone told you YHWH told them to write down X chapters to add to the book? Or that he should build an ark, or whatever? See, it’s fun to think Bruce Almighty or Evan Almighty would be fantastic, if your god came to you in the form of Morgan Freeman to give you fantastic powers to do a task, but in reality, you would think that fucker is crazy as hell. The authorities would drop him off at a mental hospital, where he would stay until he came out of his delusion and could function on his own. In reality, YHWH could have sent someone down – or several someones – already and we’d never know because in our hearts we know it is bullshit.

I don’t know if there is a higher power or not.. I don’t really care, because life is beautiful and we’re able to live it without having to throw off our responsibility on someone else. I don’t blame anyone for wanting to believe in a higher power, but I have problems with anyone telling me this book was given to humans by a god that knows all. That is bullshit. This was written by humans (regardless where they got it from) and it was passed down and changed in to multiple forms. It is FILLED with contradiciotns and absolute bullshit. (sure, own people and rape women as long as you marry them and kill slaves.. but don’t murder.. Cuz I don’t care about those folks!) If a god is a loving and all-knowing god, a book like this would be the absolute last damn thing he would EVER want associated with him. And the fact people cannot see that blows my damn mind. Not their belief in a higher power.. their adamant idolatry of this book and using it to justify what they do or don’t do.

I just.. literally can’t even.