I am going to start this off by telling you I have a rather petite frame.  Though I wear medium shirts in men’s sizes, my bone structure is on the smaller size.  I have been known to find my jeans in the adolescent section of department stores by mistake, not knowing I was not in the adult section.  Which has caused others to feel embarrassed, but it always amuses me.  I wear medium shirts in men’s sizes (and usually large in women’s) because my shoulders, for my frame, are rather broad.  I have great difficulty finding dresses that fit due to this, or long-sleeve shirts.  Do not even get me started on jackets, as I also have incredibly long arms.  Yes; I realize I am starting to sound like a lanky circus freak; I am not.  Well, I mean, I AM, but not proportionately speaking.  It is hard not to be considered somewhat freaky to many people when you have this many tattoos, stretched earlobes and unnaturally-coloured hair.  And watches.  I cannot buy a watch that fits unless it has a leather band and I cut extra holes in it.  My wrists are so petite but attached to them are incredibly large hands, for a woman.  I always have to buy large or extra large gloves.  And extra large hats, too.  My daughter has also informed me I have Vulcan ears.  Aren’t kids sweet?

I swear, this has a purpose.

END_OF_DOCUMENT_TOKEN_TO_BE_REPLACED

…Or maybe, more to the point, making myself sing, even when everything in me wishes to scream.

Three days ago, 22July2014, I drove through a rainbow. Yes, through.  This is not even scientifically possible, yet it happened.  It happened quite clearly.  I have never actually seen the end of a rainbow in my entire 34 years. Rainbows are the dispersion of light through water in the air, so you should never be able to drive through one, as your perspective would keep you seeing the rainbow ever in front of you.  Even seeing an “end” is highly unlikely, though if you have a clear view for a long enough distance, it would be possible.  Where I was driving, the visibility was .. let us say what happened should not have been possible, but happen, it did.

I have seen several things in my life that should not be possible.  It does not really matter which things.  They happened, they are done.  I do not read horoscopes.  I do not look for signs.  However, I have noticed that sometimes things present themselves to us that seem to, upon later inspection, foreshadow later events.  After driving through the rainbow, I texted someone who is, despite no genetic link, my brother.  I told him after that, I was surely to die or win at life. Funny, that.  I have not yet died, but the next day proved… another small death of sorts.  And I have suffered so many of those in my life.

END_OF_DOCUMENT_TOKEN_TO_BE_REPLACED

It’s funny how, being classified as bipolar, when I get stressed enough, I stim like someone with autism, asbergers, Tourette’s, etc. And yes, I’m spelling shit all sorts of wrong, and, at the moment, I could give two fucks or a shit less about that or grammatical errors. I have been having fairly intense stims somewhere around an hour. For those of you who suffer from any psychological prizes (hey, let’s call it something fun, instead of a disorder!!), you know how utterly motherfucking god damb exhausting they can be. Just…life-draining. And when I stim, I tic like a motherfucker. Scratching, rubbing my fingers, hitting myself, rocking back and forth,openingand closin gmy mouth,s ieltn screams, rapid blinking, rapid eye movement, tapping, sometimes sounds.. I get a nice lovely run of the stim spectrum. LUCKY ME. Thankfully, it’s only when I am incredibly super HOLY FUCKSHIT stressed the motherfuc out. And I have been..

This time of year is always pretty fucking tough on me. Starting at the beginngin of July through about the first week of August. I adopted a son out the day he was born, August 4th, 2004. And starting about a month before, I just………sink. I sink beneathe the waves of.. everything. Sounds, tastes, touches, feels. thoughts, breaths, leaves, colours, life itself. I have to keep busy. God damn, do I have to keep busy. I will cut a fuckin gentire yard with a god damn pair of scissors if that is absolutely all I have I can do to keep busy. Today, I rearranged my entire livibng room. That may not seem like much, but I had to vacuum and spray for spiders, too, because I have apparently gained an infestation of cute cuddly wolf spiders. Absolutely adorable, not lethal to most folks, but their bites suck big bulbous elephant balls. And I don’t like things randomly crawling on my face for me to squash. Yes, this has happened. And these motherfuckers are fast as hell. Look them up. Shoo, spider, you belong outside. Assholes. Anyw ay. This involved moving one 32″? television that is somewhere around 75-100 pounds off a 2′ high stand across the room.. rearranging 2 oversized loveseats and an oversized couch, moving two old-school studio speakers (the 4′ tall heavy as fuck type), the tv stand and putting a 42″? 75″ television back on the fucking stand. Alone. While dodging fucking spiders and keeping the kid busy. Whereupon I also found a tote I forgot about, seeing how it was cleverly disguised as a side table (don’t ask) and I found old birthday cards. And pictures.

END_OF_DOCUMENT_TOKEN_TO_BE_REPLACED

Yes, readers, if I’ve any left, I am back. And the title of this particular blog could not be more apt had I dreamed it, woken and immediately started clacking away at this worn and near-broken set of keys.

I have many things I need to say, want to say, and none of which are likely to come out with ease, if at all. I have been silent, have hidden prior posts, due to the feelings of someone else. Due to.. stupid reasons of my own choosing. Hell, I don’t even feel like posting this now, but I feel I must. I have several anniversaries of high import approaching, and this time of year is always a very hard one for me. And always one I face alone.

My adopted son will be 10 August 4th. Not a day passes where I don’t think of him, and remember my failures. And also the likelihood of what would have happened to him had he not been adopted out.. I keep hearing “everything for a reason” and “your happiness is right around the corner..” And it’s all bullshit. All of it. I had as much happiness, more, than I’d ever had. I met someone, and had even more. For a while. That did not last. Of course not. It seems in my life, I only get a taste of what I truly want for just long enough to really start thinking maybe, just maybe… NOPE. then it all falls apart.

Then again, August 27th marks 5 years being divorced from an abusive alcoholic misogynistic worthless asshole, so there’s that. And he didn’t manage to kill me, OR our daughter. Hooray!
Aside from that, you’d think I would get used to the disappointment, but I don’t. I never do. And this time, I gave a bit too much. Figures. It comes down to me being a crazy bitch, I suppose. But aren’t we all?

I have learned that love is not a lie; love is a liability.

When you stretch out your arms, close your eyes and jump from that ledge, chances are damn high someone won’t catch you. And that is okay. But when you truly believe, you KNOW this person WILL, and they won’t.. It crushes some very special parts of you that.. Hell, I don’t know if they’ll come back. And I honestly don’t care. What’s gone is gone. And what this experience has left me with is.. little. 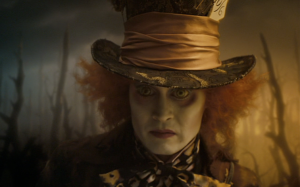 Yes, I have, Hatter. But I have come away with a soul that is slowly leaking away at the seams I can no longer sew together quickly enough. I cried out for help for once, and was answered “how”. I do not know. I only know I am mad, to the core, and sinking deeper in to a mire I’ve no strength nor motivation to climb from, because I gave my muchness to someone who did not care for it as he should have, because he was too worried about his past repeating itself, as opposed to happy I wasn’t his past. Only, now I am.. but his past didn’t repeat. I am a new past.

This is why I don’t ask for help. When the person people come to for help, to lean on, needs help, suddenly everyone disappears. Suddenly, no one knows what to do. And gods forbid they just sit, shut the fuck up, and listen. And since I would like them to just sit, not interrupting, shut the fuck up and listen, I have communication issues..no matter how many times I’ve done JUST that for them.

And this is why the strongest motherfuckers so rarely say a word, just end up found with a bullet through their heads. Because even when they said a fucking word, others just kept right on talking.

No, I’m not going to kill myself. I’m not a pussy. And no matter how hard or harsh shit gets, I’ve got shit to do. But seriously, motherfuckers, sometimes it’s YOUR turn to sit down, shut the fuck up, and listen. You’re not the only motherfucker who sometimes just needs a motherfucker to care, to listen.

I have been conspicuously silent the past few months, and for good reason. Things in my life have, at points, come to a screeching halt, and at other times they have sped so far out of control, I wanted to yell LETMEOFFLETMEOFFLETMEOFF. This has definitely been a year of upheavals and trials, for sure.. though it has also been a year for good revelations, smiles, laughter, love, dancing, blah blah all that sweet shit.

Where to start? not the beginning this time, Dear Reader. Not this time.

END_OF_DOCUMENT_TOKEN_TO_BE_REPLACED

Y’know what I’m tired of hearing, seeing people post, reading, whatever, about relationships?
“It’ll work out some day. It HAS to, right?”
Well, I’ve got your answer, darlings.
No.
NO, it does not have to work out some day. This isn’t Disney, you’re not a god damn princess, and the bottom line is NO, it will not work out for everyone.

Let me break it down for you, okay?

END_OF_DOCUMENT_TOKEN_TO_BE_REPLACED

As the fifth anniversary of my father’s death quickly approaches (it is less than a month away), many things from the past 5.5 years are popping in to my head with nearly alarming regularity. Not all of them are bad, but they have given me pause for several reasons.. Be they times of great loss or great gain.