Some early morning “real talk” for you..

A “real” woman or man is whatever the bloody hell they decide to be.

Healthy isn’t a number on a scale.

Someone else’s numbers on a scale is none of your damn business.

Sexy isn’t numbers on a scale, either. Sexy is attitude and confidence.

Three dates/booty calls is not a relationship.

A ring doesn’t make someone loyal; their choices and actions do.

Putting a ring on it isn’t going to fix the broken shit; you fix that together.

“Love at first sight” is complete and utter nonsense. That is called attraction, lust, desire. Which can be built on, if two people decide to do so.

There is no such thing as “the wrong time”. You both decide to work shit out together, or you don’t. PERIOD.

Love doesn’t give a shit about skin colour, religion, ancestral ethnicity, financial status, career status, or any of that other crap. It gives a shit about how the other person makes your soul shine during dark times, how their smile is all you can see when they’re near, how you crave their voice when they’re gone, how you want to experience life – good and bad – with them.

Someone else’s love is also none of your damn business unless one of them is being abused in ways they do not want.

Someone else’s sex life..see directly above.

Homosexuality is not a choice.

Hate IS a choice.

We all have prejudices against groups of people. ALL OF US. What makes us better is realizing this and actively working to remove those prejudices from ourselves, individually, and working in groups to combat ignorance.

None of us “deserve” shit, good or bad. That is a word we have come to throw around based on our emotions. What you say I “deserve”, another would cry “foul” if I received. Sometimes, however, the universe/life/whatever tosses us an opportunity. We either run with it or we do not.

There is NEVER an circumstance for which you do not have a reason to smile, laugh, and dance.

Positivity is a choice, not a circumstance.

The universe and world don’t give a shit about you. Creating and maintaining good bonds with exceptional people is a must.

You must love yourself.

You must find the parts of you that are not who you want to be and change them.

ONLY the individual can change themselves; you can never – EVER – change anyone but you. Ever.

Know when to stay and when to walk. When in doubt, it is time to go.

It is never – EVER – okay for someone to lay hands on you without your permission.

It is never – EVER – okay for you to lay hands on someone without their permission.

It is never – EVER – okay for someone to hit you unless you hit them first. In that case, you are a dumbass and they have the right to defend themselves.

It is never – EVER – okay for you to hit someone unless they hit you first. In that case, they are a dumbass and have the right to defend yourself.

You have the right to your beliefs and others should respect that right. That doesn’t mean you get to shove your beliefs on others.

We don’t have to believe the same shit to be friends.

We can discuss and even debate topics without resorting to name-calling.

It is just the Internet; this shit isn’t THAT damn serious.

If someone does not treat you right, talk to them to find out why without being an asshole. If they don’t change, walk.

And to go with the last one….

You are worth more than being someone’s back-burner bitch, whipping post, doormat.

If you want something, don’t wait for it….go WORK for it.

Don’t ever let someone trounce your past. It made you who you are. If they truly love you, they’ll appreciate your struggles and celebrate the victories and losses that brought you together.

Don’t ever let the world or someone make you feel you deserve less than you want. Don’t expect it to be handed to you; go work for it. But don’t let the harshness of your experiences harden you in to someone cold, unfeeling, hurt to the point of being a shell. Fight for your happiness, fight like hell. And enjoy every second of life; one day you’ll be back with the stars.

My last blog entry was about love.  Well, I would like to follow up that entry with an addition.

A few days ago, a Facebook friend posted this screenshot: 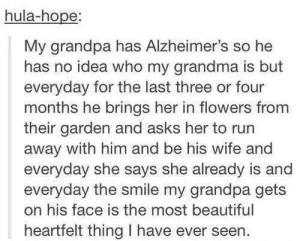 A wonderful example of not letting the world change who you are.

This screenshot made me tear up a little, because it is a wonderful example of love in its simplest most pure form.  Allow me to explain why, in light of my previous post.

We are flawed, each of us.  We are products of our environments, the people around us, how we are raised, how we are treated, the information we learn, the horrors and joys we witness throughout our lives.  But mostly, we are a product of our own choices.  We CHOOSE to change who we are based on the factors listed above, and more.  Who hurt us and how, who we hurt and how, daily nuisances and successes, et cetera.  Simply, we are the end result of what we choose to allow to affect us, and how we choose to let it affect us.

(Read more below.  It is worth your time, promise..)